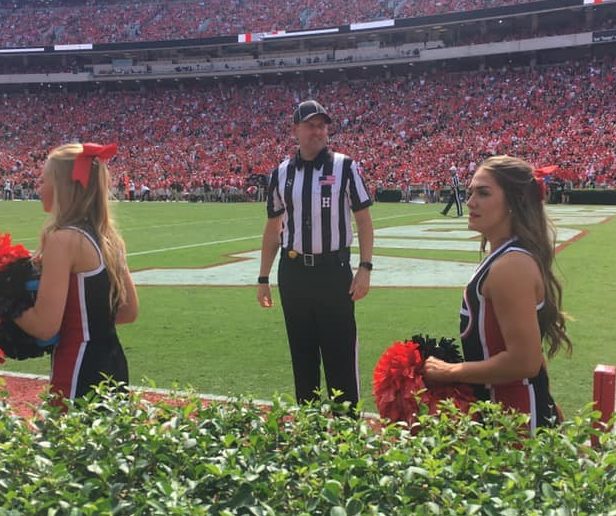 Tom Eaton (‘07, ‘08) started his officiating career at the UCF Recreation and Wellness Center

(Orlando, FL) – The National Football League (NFL) is scheduled to kick off its 2020 season this week and upcoming weekend and one of its newest game officials is a two-time UCF graduate. The league added former Knight, Tom Eaton (’07 BSBA, ’08 MBA), to its staff of officials for the upcoming season. He will make his debut on Monday Football when the New York Giants host the Pittsburgh Steelers on ESPN. Eaton is the second UCF alum and first former RWC student employee to make it to the NFL.

Eaton most recently officiated in the Southeastern Conference (SEC) and has spent three years in the NFL Officials Development Program. He officiated pre-season NFL games in 2017 and 2019 and has also officiated in the Arena Football League, XFL, and the Alliance of American Football.

Eaton, a two-time graduate of the UCF College of Business, is a fiscal manager in Palm Beach County, Florida.  Gary Cahen, the RWC’s Associate Director of Programs and a former college football official himself, supervised Eaton when he worked as an intramural sports official and supervisor more than a decade ago.

“We’re extraordinarily proud of Tom’s accomplishments, reaching the pinnacle of football officiating at the professional level. There are 121 NFL officials who are the best in the world at what they do, and now we can proudly say that one of them learned how to referee in our Intramural Sports program” says Cahen, “Tom is a talented official who worked extremely hard to get to the NFL. Sports at all levels can’t happen without officials, and we have a proud tradition of students going on to have success that helps to inspire more people to learn the craft and reap the benefits that being a sports official can provide.”

Eaton experienced success in every level of officiating when he started as an Intramural Sports referee in Fall of 2004, working sports such as Basketball, Soccer, Baseball, Softball, Flag Football, Dodgeball and Floor Hockey. He was named Intramural Floor Hockey official of the year in 2005 and was invited to officiate at regional and national flag football tournaments as one of UCF’s top officials. In 2007, he was named as one of 12 All-American Flag Football officials at the National Flag Football Tournament. He also worked high school football games with the Central Florida’s Official’s Association (CFOA) before becoming a college football official.

UCF is one of the nation’s leading programs for developing officials and referees for some of the most popular professional sports leagues globally including the National Basketball Association (NBA, WNBA) and now the National Football League (NFL).

Eaton joins Tra Blake (’99) as former Knights who are now NFL officials. Blake did not officiate while he was a student at UCF but was a participant in the UCF Basketball Officiating class after graduation to help launch his officiating career. UCF also has a rich history in professional basketball officiating. Several officials with ties to the class or UCF are currently in the NBA developmental league known as the G-League.

For more information on the Recreation and Wellness Center, Intramural Sports, and the RWC officiating development program please contact Scott Mauro at scott.mauro@ucf.edu or call 407-823-2408.