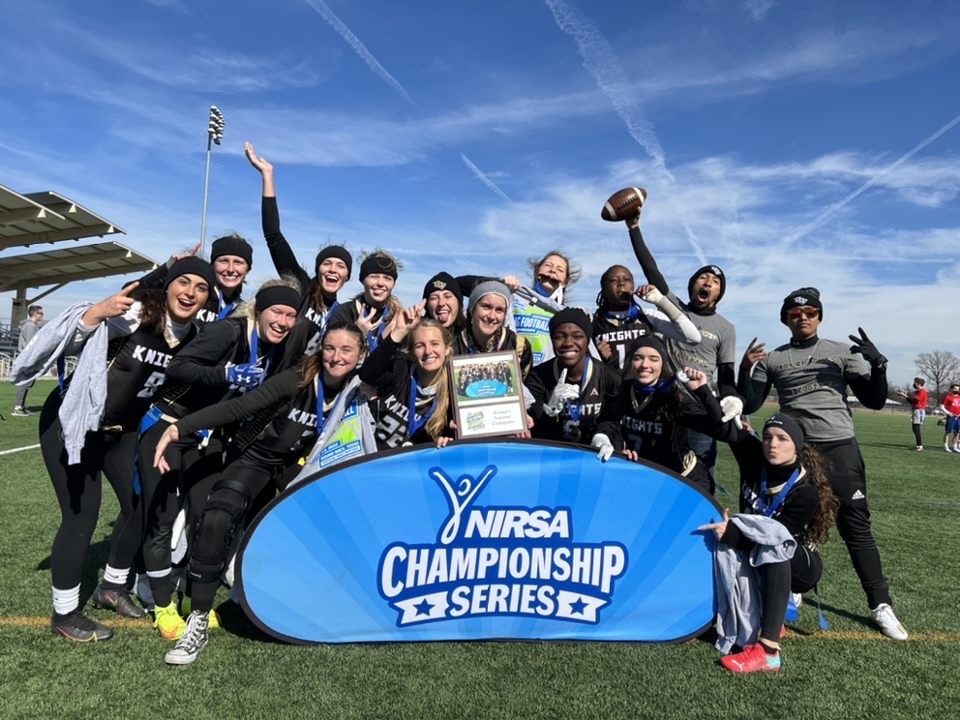 The NIRSA Flag Football Women’s National Championship game between UCF and UF was decided in thrilling fashion by a key final play. After playing to a 7-7 tie in regulation, UCF’s “Lady Knights” defense stopped UF on their first possession, and the offense took the field with a chance to win.

On 4th down, Quarterback Riley Sullivan found Jenna Springthorpe in the corner of the endzone for the game-winning touchdown, giving UCF its sixth Women’s division national championship.

“We worked really hard to build this team,” said Caroline Caplinger, captain of the Lady Knights Intramural Sports Team. “We bonded so much, and this tournament was a great experience we shared.”

The Women’s division championship was not the only title for UCF on the day.

UCF’s Co-Recreational division team, “Get Co-Rekt”, overcame an early 14-0 deficit against The University of Maryland, pulling away in the 2nd half and winning 27-14 to also earn a national championship in Round Rock, Texas.

UCF is the all-time leader in NIRSA National Flag Football Championships with 16 total, including men’s, women’s, and co-recreational titles, dating back to the first-ever tournament held in 1979. UCF teams have also made 33 Final Four appearances. UCF is the only university or college with multiple titles in all three divisions.

Caplinger, a member of both championship squads who earned Co-Recreational MVP honors, said some players from the women’s teams barely had time to celebrate before entering the co-recreational game, but all was worth it.

In addition to Caplinger, Jake Zimmerman was also named Co-Recreational MVP. Jenna Springthorpe, who scored the final touchdown, earned Women’s MVP honors, adding to a total of 26 MVP honors for UCF players over the years.

Augustus Dahl, Macey Hatton and Maggie Miller were named to the All-Tournament Teams.

Caplinger said it would not be possible to win at a national stage without the help and support of head coach Brandon Baroody and assistant coach Bianca Lagos. Inducted into the NIRSA Flag Football Hall of Fame in 2013, Baroody (‘13) has been a part of all but two of UCF’s National Championships as both a player and a coach.

After they received their awards, UCF players ended up being recognized at the airport and even received a special shoutout by the flight crew.

“To see everything we worked for the last four years- coming together at the end,” Caplinger said, “it was special for all of us.”

UCF Intramural Sports are part of the University of Central Florida’s Recreation and Wellness Center, funded and supported by the UCF Student Government.