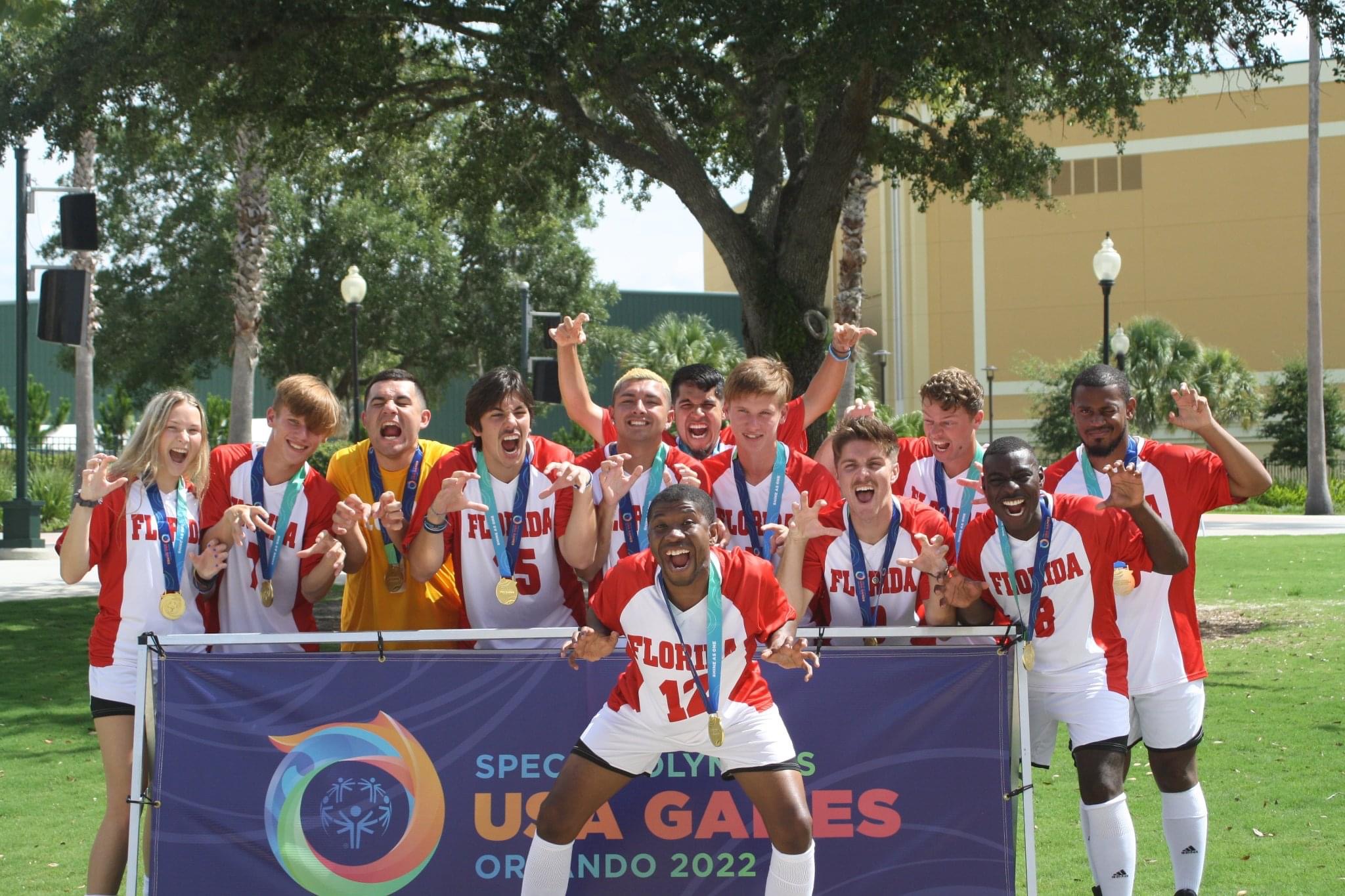 The road to gold has been a long one. Previously, the OCA Eagles had only won gold in the traditional team category, but in 2022 with UCF Men’s Soccer Club players, Sebastien Atis, William “Billy” McGregor, Kevin Reynolds, and Evan Walker’s help the OCA Eagles competed in the Unified Blue Division, the highest competition level, and won gold. Throughout the USA games, the OCA Eagles won all of their matches, said Reynolds, a senior marketing major.

The four men’s soccer club players started playing and training with the OCA Eagles in 2019 to fulfill their soccer club volunteer service requirement, however, they found playing with the Eagles fulfilled something else:

“Very quickly we saw how they could progress from us teaching them and that provided all of us with a sense of fulfillment,” Reynolds said. “It really did not feel like any sort of requirement; it was something we ended up looking forward to doing, especially when we became unified partners.”

Walker, a senior kinesiology major, shared similar thoughts to Reynolds, expressing a newfound passion that came out of volunteering.

“I can say that working with people with disabilities for the past two years has been one of the most fulfilling experiences I’ve had,” Walker said. “I’ve been so passionate about it that I want to go to grad school and work towards a career as a physical therapist, so I can serve this population.”

On a unified team, players with and without disabilities work together to improve each other’s skills, promote social connections and create a team where there is no difference between players. Atis, a senior civil engineering major, said he found that playing on a unified team or in the soccer club was no different; as always they had to work hard and try their best to win the gold.

“The Eagles helped me win gold for the first time,” Atis said. “They’ve won gold the past two Olympic games, this is their first time winning gold with the unified partners, so they helped us win gold, that’s how I like to put it.”

Not only did they win gold, but now the official unified team of Orlando City has the chance to represent the USA in the 2023 Special Olympics World Games. The Eagles trained rigorously for the 2022 USA Special Olympic Games. Almost every Saturday for about two months, they would practice different skills and techniques, Walker said. The Eagles even played as the only unified team in the XL Soccer World league every Friday for more live match experience, Reynolds said. This practice paid off in the gold medal match when one of their partners, Tyler Tate, assisted McGregor in scoring a goal; the first assist Tate has made, McGregor said.

“More so than winning the gold, that became my goal, was to be the one to assist Gary and help him to achieve his first ever goal,” Reynolds said. “That did happen during our second game and I definitely put it up there with one of my proudest soccer achievements including all of my experience, all of the different achievements I’ve had in my life. It was level with those to where it just made me feel so happy, so accomplished seeing the joy it brought not only him but everyone around us.”

“We have a great connection with the athletes but at the same time it isn’t just the athletes, it’s the coaches as well. The team feels like a family and we try to make our club the same way,” McGregor said. “We like to include everyone, even the players who don’t get to play as much; we want to make it as inclusive as possible.”

Sport Clubs are student-run, student-led organizations supported by the Sport Club Council which is part of the University of Central Florida’s Recreation and Wellness Center, and funded by the UCF Student Government.