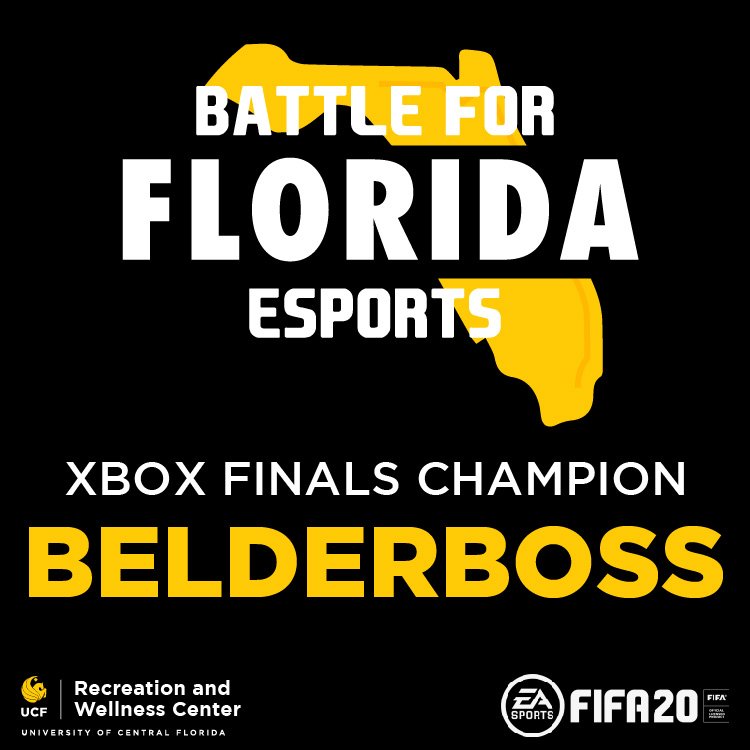 3 Knights rose above other state schools during a 2-day Esports Tournament between UCF, University of Florida, Florida State University, and University of South Florida

Orlando, FL (May 1, 2020) – Technology is doing an amazing job of keeping us connected these days. It is even giving UCF students a chance to compete against students from other schools despite local and state stay-at-home orders. UCF students had a chance to experience that firsthand and shined online this week winning a state title and had two runner-up finishes in the first ever Battle for Florida FIFA20 (soccer video game) Esports Tournament

The two-day event featured the best of the best gamers from UCF, the University of Florida, Florida State, and the University of South Florida. There were two brackets of play, Xbox and PlayStation 4 (PS4). In the Xbox bracket it was an all UCF final between Team BelderBoss (Tom Belderbos) and Team Burnout (Manuel Chimoy Lopez). BelderBoss took the title. In the PS4 bracket, UCF team cptray51 (Raymund Barros) played a great series but lost in two games to Florida.

Belderbos, grew up in Inverness, FL after moving from the Netherlands at the age of 11. He has worked at the UCF Recreation and Wellness Center for nearly four years while pursuing two degrees. He is pursuing his second degree as an Events major in the Rosen College of Hospitality

Belderbos loved the opportunity to play Esports while state gamers watched, “It’s a little different than just an Intramural game so with higher stakes there’s more to play for. I love UCF and I always want to make sure that I represent them well.” 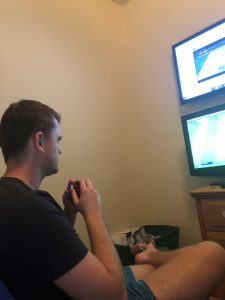 Despite finishing second, Manuel Chimoy Lopez (Team Burnout) was thrilled to be in the competition. The junior from Weston, Florida, is majoring in Radio and Television in the Nicholson School of Communications. He has been playing Esports since middle school when he fell in love with a combat game called Black Ops 2. He started playing other high-level games like BO2, Smite, Overwatch, League of Legends and most recently Valorant.

Lopez feels the intramural sports Esport experience is fun and for everyone, “What I would tell a friend it’s just do it, if you think you’re not good enough, who cares, its free and it would be good practice.”

Raymund Barros, a senior statistics major in the College of Sciences, defeated the one of the teams from UF to make it a championship sweep. Senior Mustapha Daioune also participated but lost in the semifinal of the PS4 bracket to Florida.

Barros loved traditional team sports growing up in Kissimmee, Florida. He played football on the offensive line at Poinciana High School for four years. He naturally gravitated to intramural sports like flag football, basketball, and volleyball after coming to UCF. He has not always played Esports but loves the fact that state tournament is helping to build the UCF brand.

“I love the idea of IM Esports because I am a very competitive person. It allows me to play different people then just my friends to test my skills, “ Barros said of being able to connect with other students, “it (intramural sports) allows you to interact with others who have the same hobbies as you.”

The schools streamed the tournament on Twitch. On day one there were more than 600 views.  The matches were the best of three (meaning each person had to win 2 times to advance). The average match took about 45 minutes. FIFA20 is one of the most popular soccer video games globally. Campus recreation leaders chose the top teams from FIFA Esports tournaments they ran recently online after state schools moved to distance learning.

Esports is giving people everywhere a chance to fill the thrill of victory and connect with like-minded individuals. Esports tournaments between professional athletes in soccer, the NBA, NFL, Major League Baseball, Golf and NASCAR are now commonplace. Campus Recreation professionals from all four schools had that very framework of connection in mind when they decided to organize tournament in April.

The demand for Esports is on the rise at UCF. Intramural Sports staff has increased its gaming programming both at the main and downtown campuses in the last year. UCF Sport Clubs has had an Esports team for two years. The club has been competing in games such as Rocket League, Rainbow 6 Siege, and Overwatch.

UCF IM Sports is running several Esports Tournaments throughout the summer including FIFA, Rocket League, MLB the Show, Super Smash Bros, Madden (football), NBA2K, and NHL. You can register for IMLeagues.com/UCF as part of the new UCF RWC+ platform that the Recreation and Wellness Center programming teams designed in March. The platform includes online workouts, at home adventures, cooking recipes, virtual national park tours, student assisted workouts, and athletic training. It is a one-stop shop to keep active at home.

Belderbos feels the intramural sports Esports experience is fun for everyone, “I think the process is getting better every month and the rules are starting to get more defined! I love being able to play on my time and meeting new friends with similar interests. It’s been fun!”